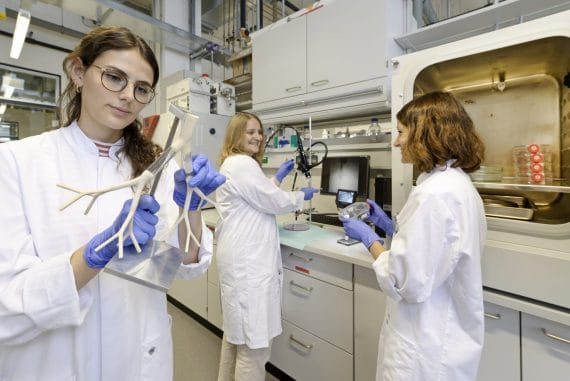 Do plaid shirts just appear out of nowhere?
We’ve all heard those sardonic remarks about Aachen and its overabundance of men. And who is to blame? Well, obviously all the mechanical engineers in their plaid shirts. But is it really surprising that there are so many mechanical engineers here? The simple answer: No! The Aachen-Liège region is hailed as the cradle of industrial textile technology on the European mainland. And, back in the day, a growing, top-performing textile industry – along with the coal mining, metal smelting and metal processing operations in the area – needed plenty of skilled technicians. After all, steam engines and fulling machines with cylinders were not simply going to develop themselves. Enter the Aachen Polytechnic, which started teaching in 1870 – and has been training first-class engineers, mechanical and otherwise, ever since. Today, the internationally renowned RWTH Aachen University ranks among Germany’s Universities of Excellence and, boasting more than 47,000 students, is the country’s largest technical university.
The exhibition “Lernen. Forschen. Machen. 150 Years of RWTH Aachen” offers insights into historical and current developments in technology, showcasing research highlights like a robot that can separate waste, an incubator for monitoring premature babies, or “Reinheart”, the artificial heart.
But it also takes a critical look at the RWTH’s own history and questions the university’s stance on its socio-political responsibility.
Since it was founded, the RWTH has played a major role in shaping the cityscape and the development of Aachen.
First with the Central Campus in the old-town quarter around Ponttor, then with the expansion on the Hörn and finally with the Campus Melaten. Soon the Campus West will also be visible.
The tight interweaving of Aachen’s city history and development with the RWTH means that an exhibition celebrating the 150th anniversary of the university at the Centre Charlemagne, Aachen’s museum of city history, is in the best of hands. Together with the RWTH Aachen University, the City of Aachen is therefore delighted to invite you – one year later than planned due to Corona – to the show “Lernen. Forschen. Machen. 150 Years of RWTH Aachen”, from 30 October 2021 to 13 February 2022 at the Centre Charlemagne.